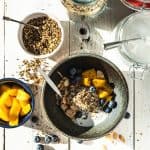 Looking for a high-protein breakfast to start your day off right but can't (or don't) eat eggs, dairy or gluten? Here's the recipe you've been waiting for! This Killer Grain & Seed Cereal is super simple and high in protein and nutrients. Make a big batch to store in the cupboard for several months. Just add boiling water, top with some delicious tid-bits, and breakfast is served! It's chalk-full of protein by way of hemp hearts, chia seeds, buckwheat and toasted quinoa.

This cereal is so easy to make and you can make enough to last you several months. The "secret" ingredient is toasted quinoa! I'm seriously in love. I put it on everything!

How to make crispy quinoa

First thing's first...you have to rinse your quinoa. Really well. Don't ignore this step or you could have bitter, soapy-tasting quinoa. The grains have a natural coating called Saponin that gives the unpleasant taste so this needs to go! If you find pre-rinsed quinoa great! But I would still give it at least a quick rinse just to be sure. Put the quinoa into a fine sieve over a larger bowl. Let cold water run over it for at least 2 minutes, agitating with your hand every so often.

Bring 4 cups of water to a boil and add rinsed quinoa. Turn heat down to a simmer and let cook for 10 minutes. Drain and put back in the pot. Stir in the oil and salt and spread evenly on a baking sheet.

Broil on high, in the top third of oven, for 8-10 minutes, stirring half way through, or until it's popping and getting tanned and crispy. This could take less or more time depending on the strength of your broiler. Keep a very close eye on it as you broil, especially the second half. It can start to burn quickly once it starts browning. Quinoa should be dried out completely and crispy. Turn the broiler down to low to finish it off if necessary and just to be sure, you can turn off your oven when it's done and let the quinoa cool in the oven.

If you have more time or find broiling too tricky, you can bake the quinoa at 350F for approximately one hour, stirring every 15 minutes until dry and crispy.

Make some extra to toss on salads or roasted vegetables, in soups etc. It adds an amazing crunch to anything and everything...even popcorn or ice cream!

The rest is simple. Take equal parts toasted quinoa, chia seeds, hemp hearts/seeds, mix them together and store in a jar or container and store it in the fridge. Boom!

Let's make a breakfast bowl with this killer cereal!

2 tablespoon will keep you satisfied for hours. Especially with other toppings added. This doesn't seem like a lot but it is very filling. Of course you can have as much or as little as you like. Play around with it. Add boiling water to the mix, about ¼ cup for 2 tbsp. Add more or less depending on how thick or thin you like it. Give it a little stir and let stand for 3-5 mins. I put a plate on top of the bowl to keep it warm but it's delicious at room temperature as well.

I topped this bowl with mango, blueberries, coconut milk (full fat from a can), toasted, sliced almonds, and extra toasted quinoa.

Be sure to let me know in the comments what combinations of toppings you try!

For the toasted quinoa