Super simple, super easy! This Thai Style Coconut Chicken Soup is rich and creamy but also somehow light and refreshing! It's soon to become one of your favourites!

I say "Thai Style" because it's not authentic. It's my own twist on a Thai classic soup. The main missing ingredient is galangal. I used to live in a big, multicultural city where any and every ingredient was available at my fingertips. Last year I moved to a small town where some things are impossible to find so I'm forced to find alternative ways to make some of my favourite international dishes.

Another tweak is the removal of the aromatics. In Thailand big chunks of inedible ingredients are left in the bowl for you to avoid. I've "Westernized" this by infusing the chicken stock first and then straining it. Making every spoonful entirely edible. It's just a little easier to eat.

This recipe calls for Enoki mushrooms which are thin and stringy. They are great in soup as they act sort of like a noodle without the noodle! They come in a clump and need about 2 inches of the stems trimmed off before separating them.

If you don't like Enoki mushrooms or can't find them, you can use any kind of mushrooms you like. Even canned straw mushrooms would work perfectly here.

Kaffir limes are native to Southeast Asia and are used extensively in that part of the world, especially Thailand. They have a very distinct flavour unlike any other citrus fruit. It is what makes many Thai dishes so uniquely flavoured. If you don't have access to an Asian supermarket or specialty store you can order Dried Kaffir Lime Leaves. You can also substitute the lime leaves with grated, regular lime, zest. The flavour won't be the same but the dish will still be delicious! I do recommend picking up some of the leaves if you like cooking Thai food. They are a game changer! Buy a large bag of fresh leaves and store them in the freezer.

This post contains affiliate links. As an Amazon Associate I earn a small commission from qualifying purchases. 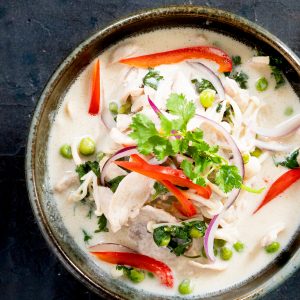 This soup will keep in the refrigerator for 5 days.  Reheat on the stovetop or in the microwave.  Freeze for up to 6 months.

Hello and welcome to My Pocket Kitchen! I'm Andrea, a semi-retired Pastry Chef and avid home cook. Here you will find easy, step by step recipes that are elegant enough for guests, but also work for any night of the week. Hope you have fun! Read More…