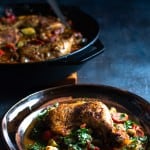 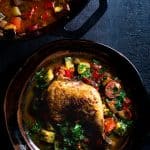 This warm and hearty Spanish Chicken Bake is easy to prepare and very versatile. The comforting, earthy flavours of Spain come together into a delicious and healthy one pot meal.

Spanish Chicken Bake uses one of my favourite Spanish flavour combinations; chicken, chorizo and smoked paprika. All nestled in a "stew" of vegetables which, in Spain, is called "Pisto". My Spanish father in law makes Pisto often and it has become a family favourite over the years. Typically we eat it with a fried egg on top and some big hunks of crusty bread. So simple and delicious that it can stand on it's own as the main event but also makes a great side dish to many things. Especially chicken.

Roasted red peppers are a staple in Spanish cuisine. Yes, you could use the jarred variety but they are often in a vinegar brine. Plus making your own is so easy and inexpensive! The homemade variety are also more flavourful and juicy.

Roasting peppers is simple. Place whole peppers on a greased or lined tray and roast at 425°F for 40 minutes, turning half way through baking time. The amount of time may vary depending on the size of your peppers. You are looking for them to be charred and wilted.

Next place warm peppers in a bowl, cover with plastic wrap and let them steam for at least 15 minutes or until you are ready to peel. This is where it can get a bit messy. The peppers are very juicy (which is what makes them so delicious!) and release a lot of liquid when cut open. Hold each pepper over a bowl and pull the stem end out with most of the core and seeds. Let the water drain into the bowl. Place on a cutting board, cut open to lay flat. Wipe off the seeds with a paper towel or knife. Some suggest running them under water to remove the seeds and skin but I find this washes away some of the flavour. Once the seeds are removed. Flip the pepper over and pull off the skin. If some small pieces stay attached don't sweat it. Chop into approximately 1" pieces and set aside.

This recipe uses 3 large peppers but you could easily do more and store them in the fridge or freezer to throw into salads or as a side to any dish even as a snack on a piece of bread with cheese. For storing in the fridge cut into large strips and place in a container. Pour olive oil over to cover and add a couple cloves of garlic if you like. Store in the fridge for a week. To freeze, cut into strips and layer between pieces of wax or parchment paper. That way they don't stick together and you can peel off one layer at a time as needed.

Make sure to buy the right kind of chorizo. The Spanish style is smoked and dried unlike the Mexican version which is made with fresh, raw, ground pork. It isn't always easy to find Spanish chorizo but there is a Portuguese version that is similar and more readily available. If you are interested in authentic Spanish foods and ingredients I have ordered several things, including the most delicious chorizo, from Solfarmers here in Canada. For the U.S. and other countries try La Tienda.

The rest of the vegetables are straight forward. There is no need to peel the tomatoes or zucchini but do peel the eggplant and onion. Chop everything into ½ -1" chunks and keep in separate bowls. You will be cooking them in layers. Leave the rosemary and thyme whole and chop the parsley and garlic.

Smoked paprika is a Spanish pantry staple. I highly recommend adding it to your spice cabinet. It is a special and unique ingredient and no other paprika compares. It comes in sweet or hot and has a wonderful smokey flavour. I used sweet here but if you like things spicy feel free to substitute! Make sure what you are buying is imported from Spain or it won't be the same. If you can't find it in stores try this Smoked Sweet Paprika . Or you can order it from the online shops I mentioned above.

I used whole legs but you could use thighs or drumsticks. If you insist on using breasts add them to the vegetables 15 minutes after it goes in the oven so they don't overcook and after 25 minutes if using boneless (which I don't recommend). I do recommend using bone-in skin on dark meat for the best flavour. Dark meat also lends well to braising and becomes "fall of the bone" tender.

After preparing the vegetables and chorizo it's time to sear the chicken. Why take this extra step? More flavour! The browning of the skin adds extra flavour to the pan where you will cook the rest of the ingredients. It creates the first layer of flavour and a nice crispy skin. Win-win! Get your pan nice and hot, add some olive oil and start with skin side down. Sear the chicken on both sides to acheive a nice golden brown colour . You might have to adjust the temperature, depending on the pan you are using, to avoid burning.

I bought my first set of cast iron skillets only a few month ago and I have absolutely no idea what took me so long! Now I want to cook just about everything in them! For this recipe I used this 12-Inch Cast Iron Skillet . It is a misconception that cast iron pans require a lot of work. If you buy a pre-seasoned one (which they mostly all are these days) the work is already done. All you have to do is use it, wash it (and yes you can use soap and scrub it!), dry and rub on a bit of oil. That's it.

what if I don't have a cast iron pan?

No problem. You can use any pan or dish that is large enough to hold everything. Opt out of a one pot meal by putting everything in a casserole dish or roasting pan after the first cooking stage. That way if you only have a small pan, you can cook each vegetable separately, mix them together in a bowl then put them in the baking dish. Easy peasy!

After the chicken is set aside, drain some of the oil so you have about 2 tablespoon remaining. Don't clean the pan. You want all the good bits on the bottom for extra flavour. Heat the pan back up, if necessary, and sautee the chorizo until it starts browning. Remove set aside with the chicken. Next sautee the vegetables starting with the onions and working your way through each one. Once done in goes the chorizo and red peppers and chicken. Don't submerge the chicken completely in the sauce. Leave the skin exposed so it remains dry and crisp. Place some sprigs of fresh rosemary and thyme on top and put the whole thing in the oven, uncovered. Bake for 45 minutes. What you end up with is fall-off-the-bone chicken and a vegetable stew that melts in your mouth. Sound good? Sprinkle with a generous amount of chopped parsley and serve with crusty bread, rice or potatoes.

It's comfort food at it's finest! Leftover vegetables can be served with a fried egg and crusty bread!

With the exclusion of Solfarmers and La Tienda. This post contains affiliate links. As an Amazon Associate I earn a small commission from qualifying purchases.

Prepare the other ingredients